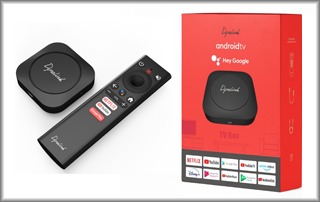 In addition to the review, you will also find multiple tips and tricks below that will allow you to supercharge your Dynalink Android TV Box.

This streaming device was purchased by TROYPOINT and this is not a sponsored post. This is an unbiased review and you will see that I point out both the good and bad regarding this Android TV Box.

The new Dynalink Android TV Box is taking the streaming world by storm for a few reasons.

The first was its introductory price point at $29.99 during the 2020 holiday season.

Second, is the fact that this fairly unknown Taiwanese company is taking on giants such as the Amazon Fire TV Stick, Chromecast with Google TV, TiVo Stream 4K, and Roku.

And third, we usually don’t see a licensed version of Android TV running 4K on these less expensive boxes.  What we usually get is stock Android with a launcher that allows for use on a television. 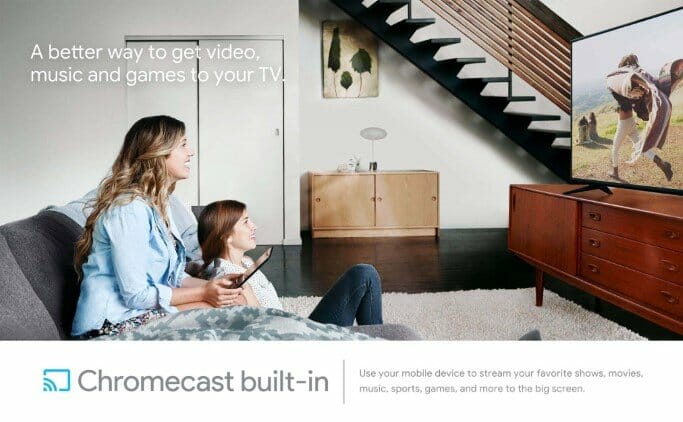 Yes, there is a big difference between Android TV and stock Android.

Is this $50 Android TV Box really that good?  Keep reading and find out!

The Dynalink Android TV Box runs true Android TV plus the proper licensing for Netflix, Amazon Prime, and Chromecast which is a huge plus. 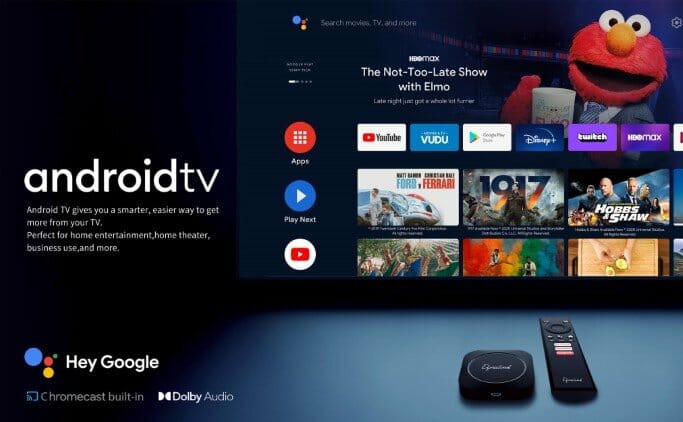 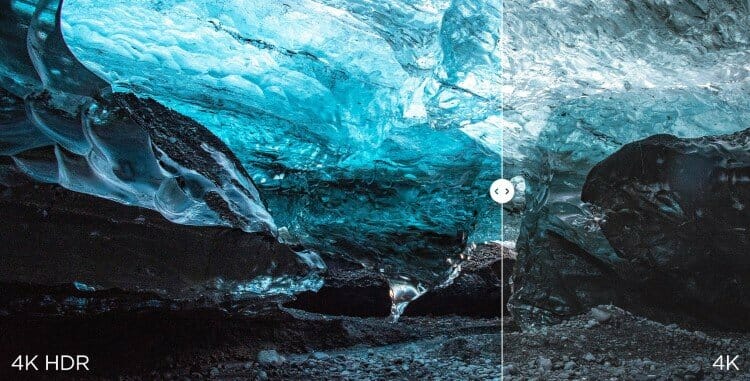 The Google Assistant button allows users to search by voice or control smart home devices throughout the home.

Google Play Store is available on this device which provides access to all of the most popular streaming apps such as Netflix, Hulu, Prime Video, YouTube, Peacock TV, Disney+, HBO Max, and many more.

It’s important to point out that the Google Play Store installed on this device isn’t the same one that you get with Android phones and tablets.  This is Android TV Google Play Store and provides access to applications that are optimized for the television experience.  But, we can always sideload apps that aren’t available through the official app store.

Dynalink released an update on January 26th, 2021 which addressed the following items.

Unfortunately, Dynalink went backwards with the 8th item on the list, Remove Erase & Format option.  This has taken away the option to expand internal storage so we can install apps onto external storage.

Due to the low amount of internal storage, this is a bad decision on Dynalink’s part.

Important! Dynalink released an update V2.01.03 which took away the option to expand internal storage.  USB storage still works but you can’t install applications onto the USB device anymore.

Previously, we were able to expand internal storage with a 16GB USB drive or smaller. 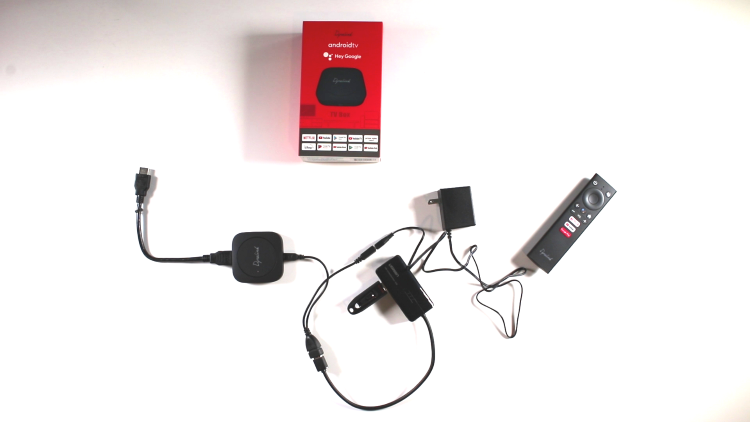 I used Analiti Speed Test App for the following tests.

During the WiFi tests, I am connected to the 5Ghz band on my Asus AC3100 Router.  This router resides in the same room as my Dynalink Android TV Box (approximately 20 feet away from wireless router).

Since the Dynalink Android TV Box doesn’t come with an Ethernet port, I have connected my UGREEN USB 3.0 Gigabit Ethernet Adapter by way of and OTG cable. 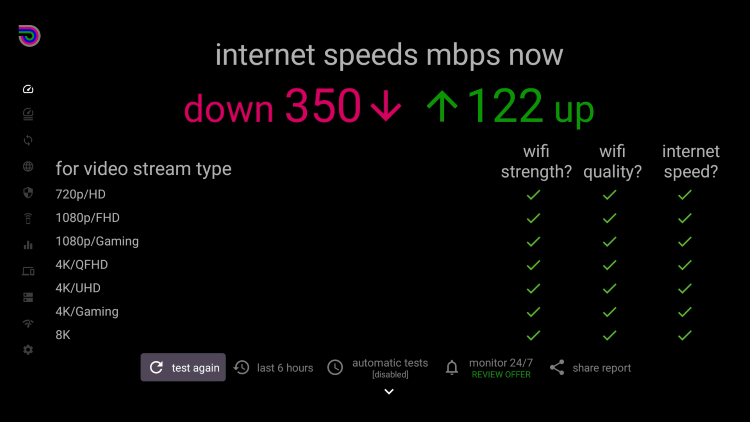 I used the TROYPOINT App with the Rapid App Installer and sideloaded some of the most popular APKs and my favorite IPTV service.

It tried Syncler, Cinema HD, and Kodi for some on-demand movies and TV shows.

I then switched to TiviMate for live channels through my favorite IPTV provider.

No problems whatsoever with the applications and service that I tested above.

Important note:  Syncler, Kodi, and TiViMate are available for install through Google Play Store on the Dynalink Android TV Box.

I paired my Bluetooth game controller with the Dynalink Android TV Box and tested some of the more popular games.

I’m looking forward to installing Retroarch on this system and playing some of my favorite old-school classics!

One game can quickly reduce your storage by 1 to 2 GB or more. 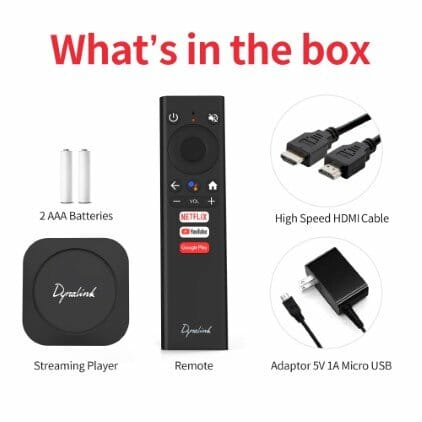 At that time, I recommended purchasing this device due to the price and ability to expand internal storage with small USB drives.

Personally, I wouldn’t purchase this device at full price which is $49.95.  Instead, I would purchase the Amazon Fire TV Stick 4K.

The Amazon Fire TV Stick 4K will soon be receiving the update that the new Firesticks come with, and I think it’s a better choice than the Dynalink at the $49.95 price point.

If Dynalink provides an update to expand internal storage, I may change my opinion on this.

Due to the numerous amount of awesome applications and games available, it’s extremely important to have more than 3GB to install applications in my opinion.

Some of you may only require the use of a few applications on your system and if that is the case, this might be a great option for you.

I was blown away at the download speeds I got through WiFi with my VPN on and off.  There is really no need for me to use the USB Ethernet adapter that I connected with an OTG cable.  But, if you do require Ethernet, you can easily do this with an inexpensive OTG cable.

I’m happy to see that Dynalink is using barebones Android TV as opposed to a modified version which Chromecast with Google TV has.  The Chromecast device caters to those who are subscribed to multiple streaming services which I don’t like.

Please check back on a frequent basis as I will be updating this page with new tutorials centered around the Dynalink Android TV Box.

I rate the Dynalink Android TV Box 4 stars out of 5.