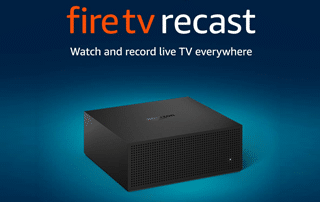 This unbiased Fire TV Recast review has been written by Troy from TROYPOINT.  This device was purchased by Troy and not provided complimentary by Amazon.

The Fire TV Recast is a DVR (digital video recorder) which will allow you to watch and record over-the-air TV.  You can do this at home through a Fire TV/Stick or Echo Show or on the go through a compatible mobile device.

You can issue commands to the Fire TV Recast with Alexa-enabled devices.  You can say things like “Alexa, open Channel Guide” or “Alexa, record Riverdale.”  You can even play live or recorded TV shows directly on the Echo Show!

There are two models of the Fire TV Recast available. 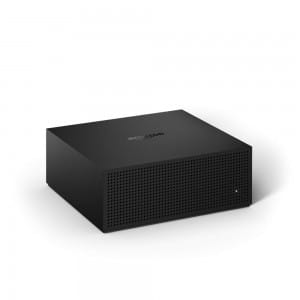 Personally, I would never have the need to record more than two shows via over the air antenna so 4 tuners is a little overkill in my opinion.

To use the Fire TV Recast, you will need the following items which are sold separately.

The first, is an outdoor antenna that I personally use which is the RCA Compact Outdoor Yagi HDTV Antenna with 70 Mile Range.

The reason why I use an outdoor antenna is because this provides the best possible reception.  Also, it is simple to spread this signal to all other television hookups in the house since this is connected to the main splitter in my basement. 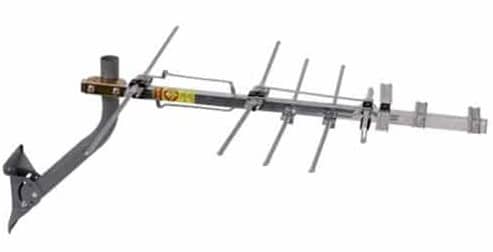 Some people would prefer using an indoor antenna instead and in this case, I recommend the Mohu Leaf Indoor HDTV Antenna.

These antennas come with differing reception distances so you an choose which best fits your needs.

I recently replaced my Dad’s indoor RCA antenna with the 60-Mile Indoor Mohu Leaf and it made a huge difference in the number and quality of channels received. 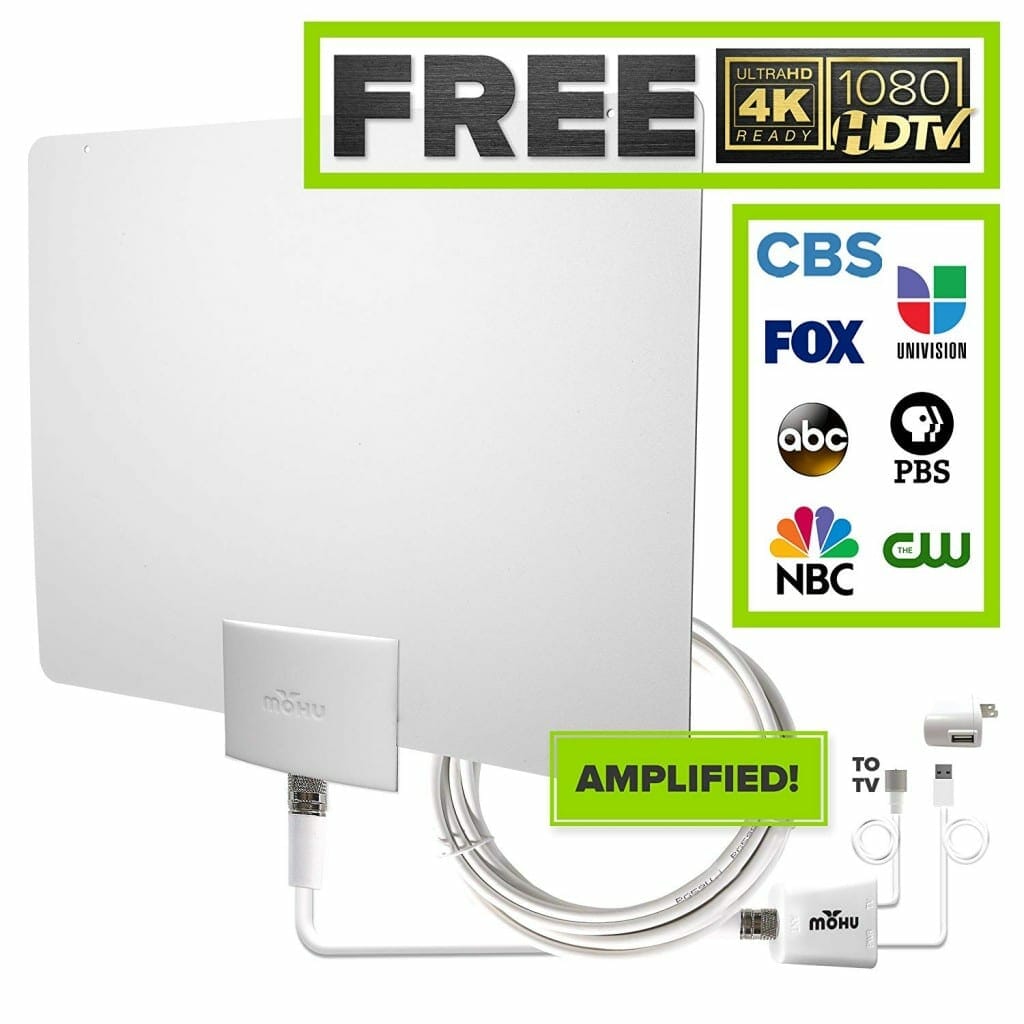 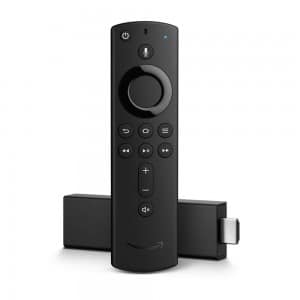 You must have a Fire TV device to play-back the shows that you have recorded on the Fire TV Recast.

I recommend the Fire TV Stick 4K but it will also work on the other devices in the lineup as well.

From what I have read, it does not work very well with the 1st Generation Fire TV Stick which is expected due to its low processing power.

You can also play-back live TV and shows that you have recorded through an Amazon Echo Show or supported mobile device with the Fire TV App.

Setting up the Fire TV Recast was simple.

I plugged mine directly into an available LAN port (with network cable) on my router for a more reliable connection.  Then, I connected my over the air coax cable and power cord to the unit.

It is important to note that you are not required to use a network cable because it will work via wireless connection as well through your WiFi router.

As mentioned earlier, you must use the Fire TV App to configure the Fire TV Recast and this will work on all modern smartphones and tablets.  You can install the Fire TV App directly through your respective app store by searching “Fire TV”.

Here are the instructions that have been taken directly from the Amazon Website.

Once you have successfully setup the Fire TV Recast, you can now access the various functions through the “DVR” menu item on the Fire TV/Stick. 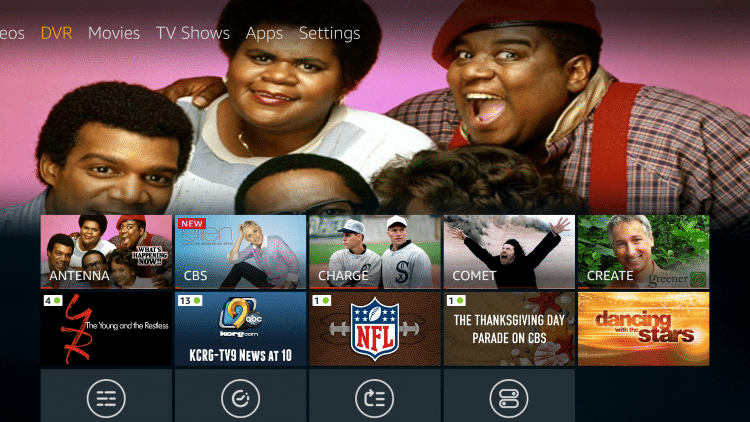 Once you enter the DVR section, you can choose from the following, Channel Guide, Scheduled Recordings, Recording Priority, and DVR Settings. 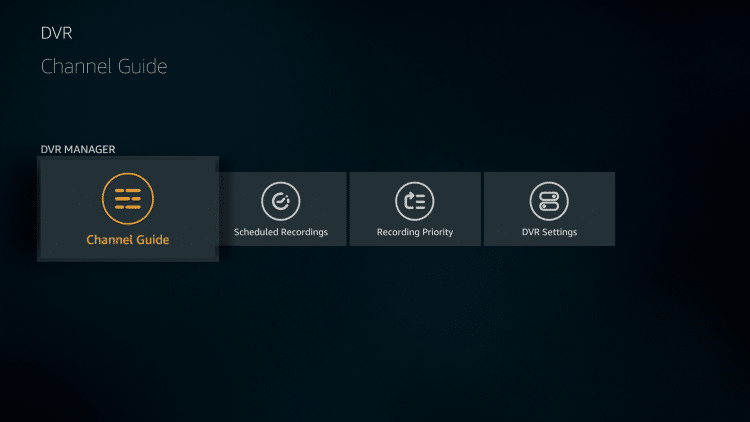 As you can see below, the Fire TV Recast sports a nice-looking electronic program guide, making it easy to browse through over-the-air channels.  Pressing the menu button on the remote provides the ability to Filter Channels, Add to Favorite Channels, and Record. 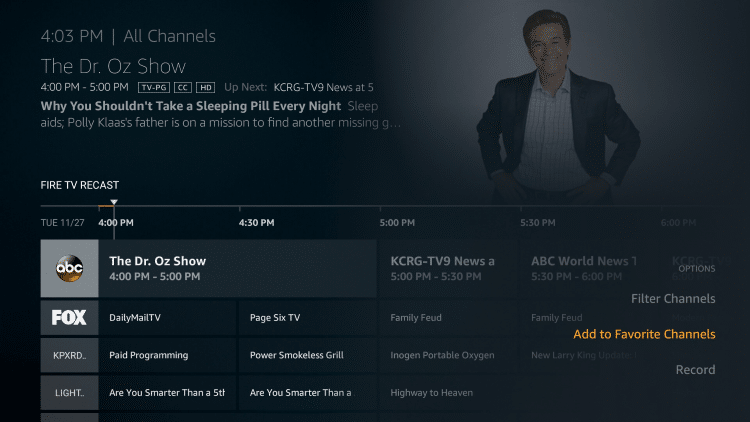 Once you launch a channel, you can access various functions by pressing the menu button on the Fire TV Remote which includes Channel Guide, Jump to Live, Earliest Available, Captions & Audio, and Record. 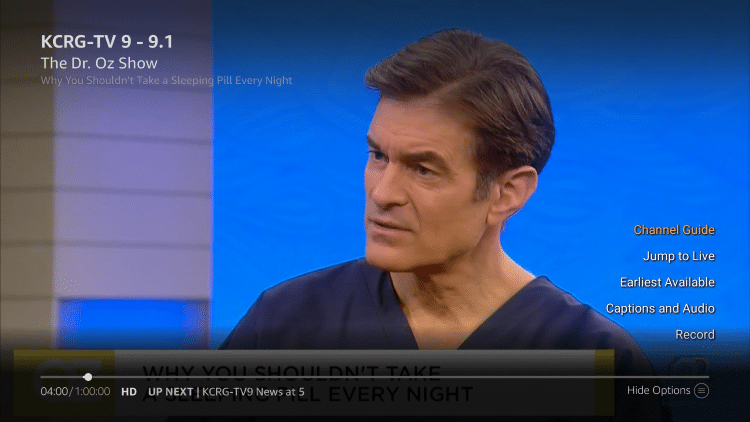 Within the Captions and Audio section, you can configure subtitles and in my testing they work very well. 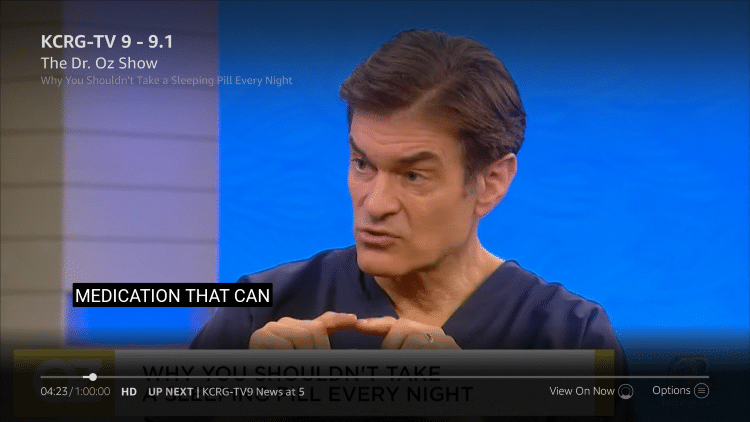 Pushing the down button on the remote will show you what is currently available and allow you to quickly change channels. 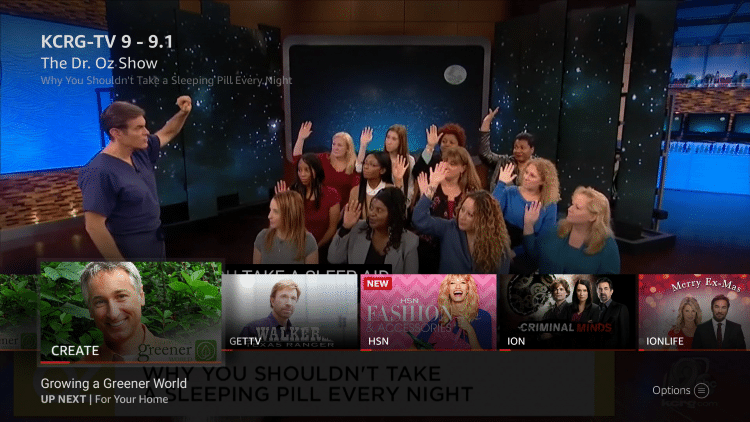 The recording features that come with this device are outstanding.  You will see below some test recordings that have been added to my Fire TV Recast. 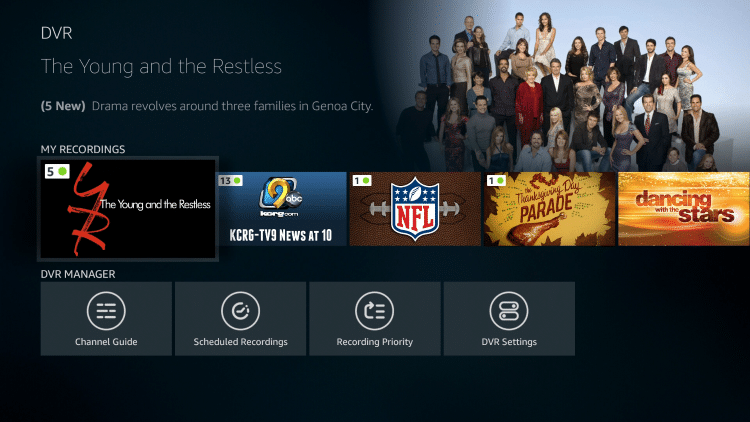 This is the screen for a specific recording which allows you to play your chosen show from the series or go into recording options. 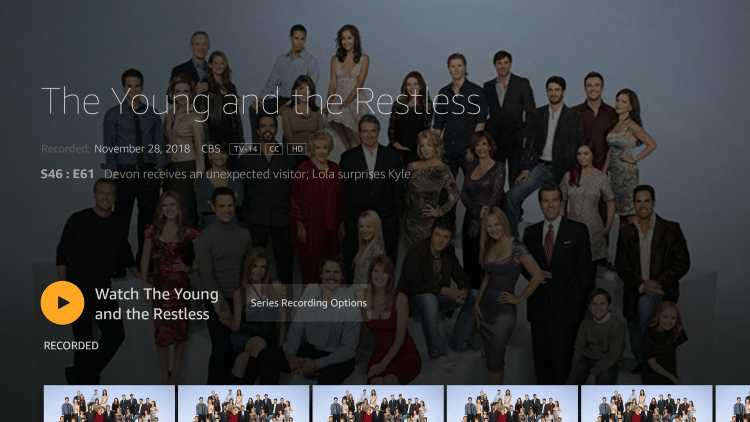 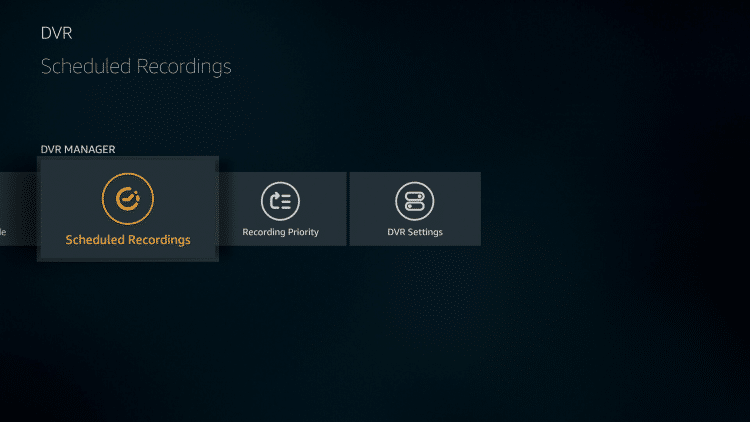 This will provide a nice display of the recordings that have been scheduled. 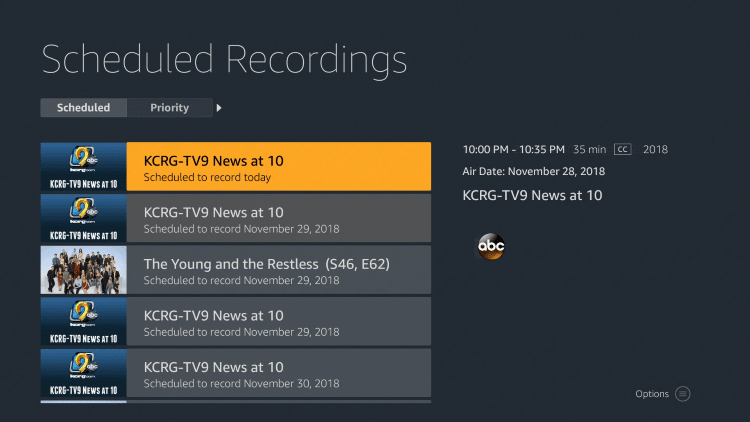 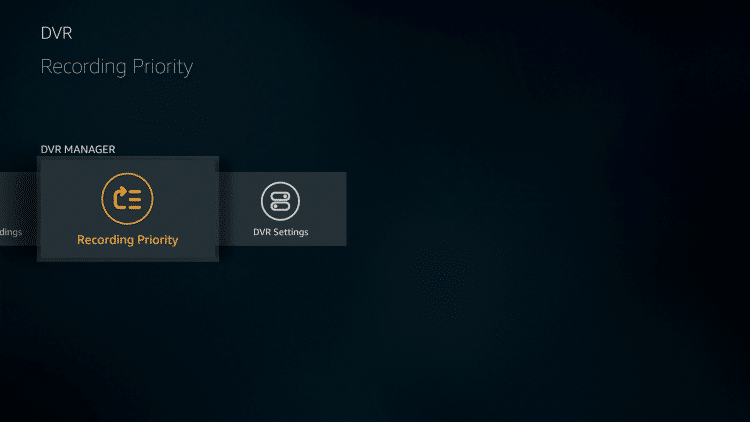 Same screen as previous but the “Priority” toggle has been applied.  We can set what is most important in case there are more than two recordings scheduled at the same time. 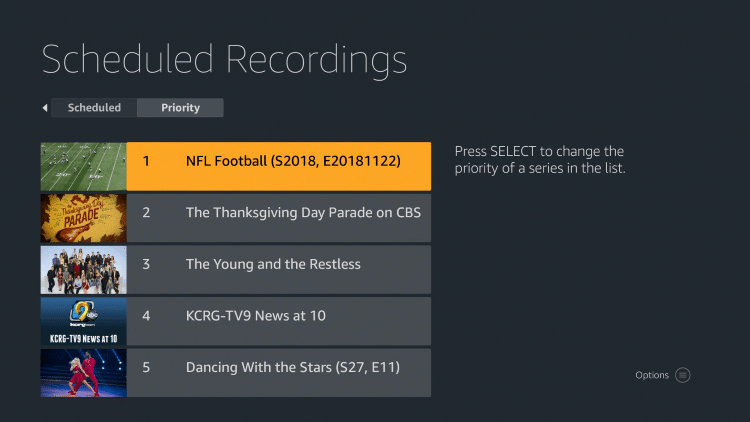 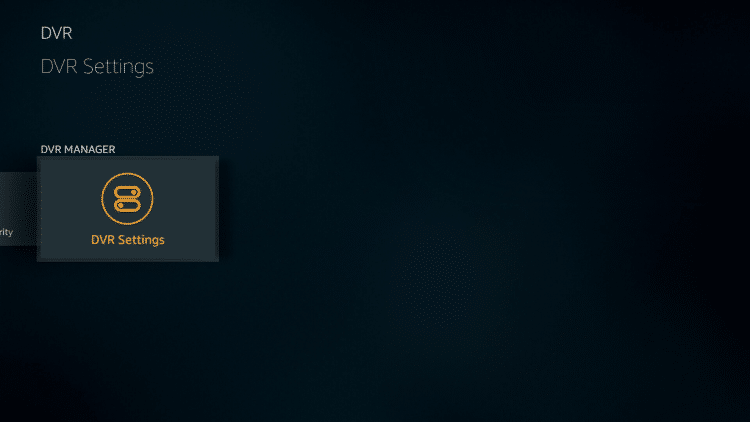 This will take us to the same location that we can access through Fire TV Settings / Live TV. 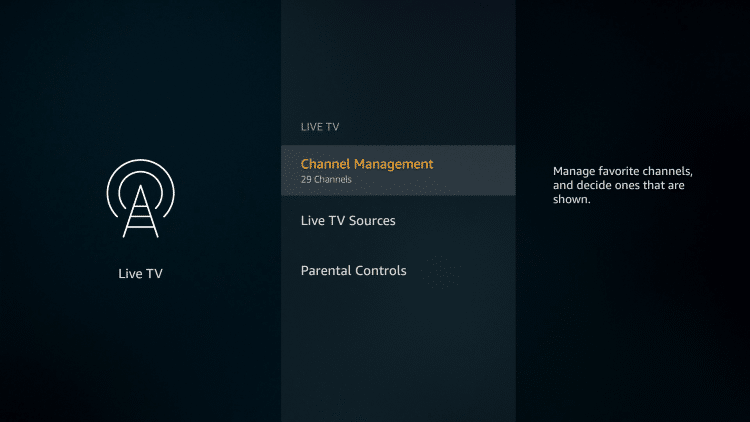 For the record, I am using a Fire TV Stick 4K during my review.

When playing live TV, there is absolutely no lag or stutter which I have found in other similar products.  While playing live television, the menu button on the remote provides us with the following features, Channel Guide, Earliest Available, Captions & Audio, and Record.

We are able to pause live television and then resume or click menu button on remote and “Jump to Live”.  The fast forward button will advance the video by 30 seconds and the rewind button will go back 10 seconds.  Very handy when moving through commercials for paused TV or recorded shows!

The live TV looks incredible with no buffering whatsoever.  I am very impressed.

The recording capabilities are very similar to cable and satellite DVRs that provide the same functionality.

The following recording features are available with the Fire TV Recast. 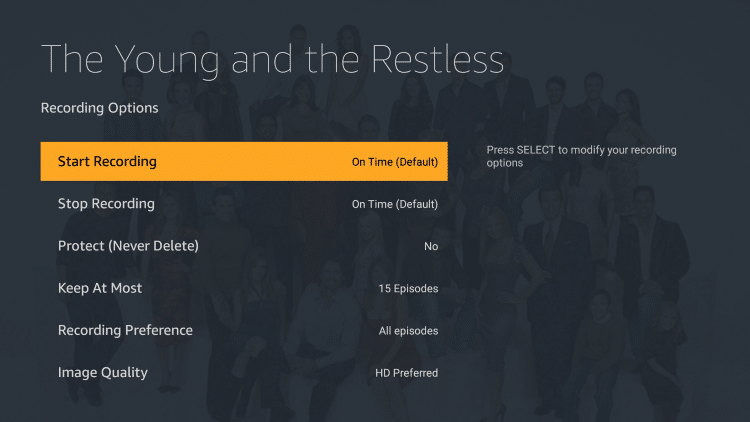 You can record a current show that is playing but you can’t schedule recordings for the future because there is no electronic program guide built into the app. 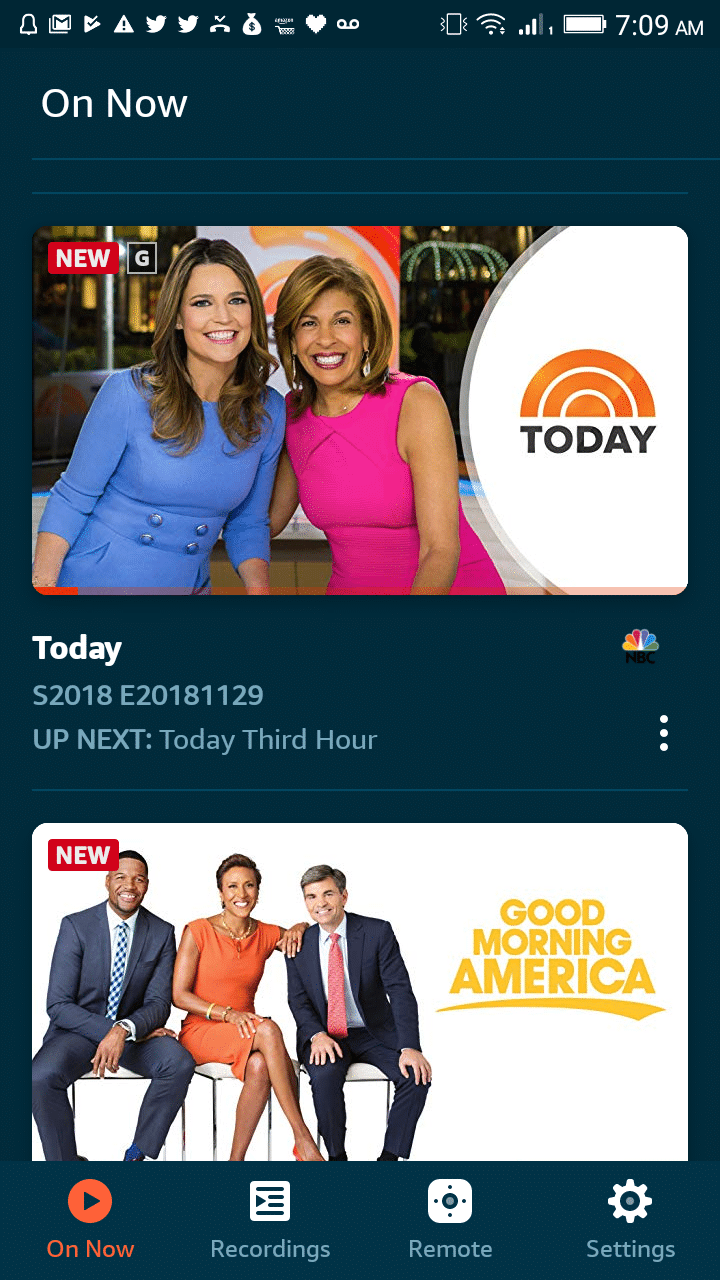 This is the page in the app that displays your recordings. 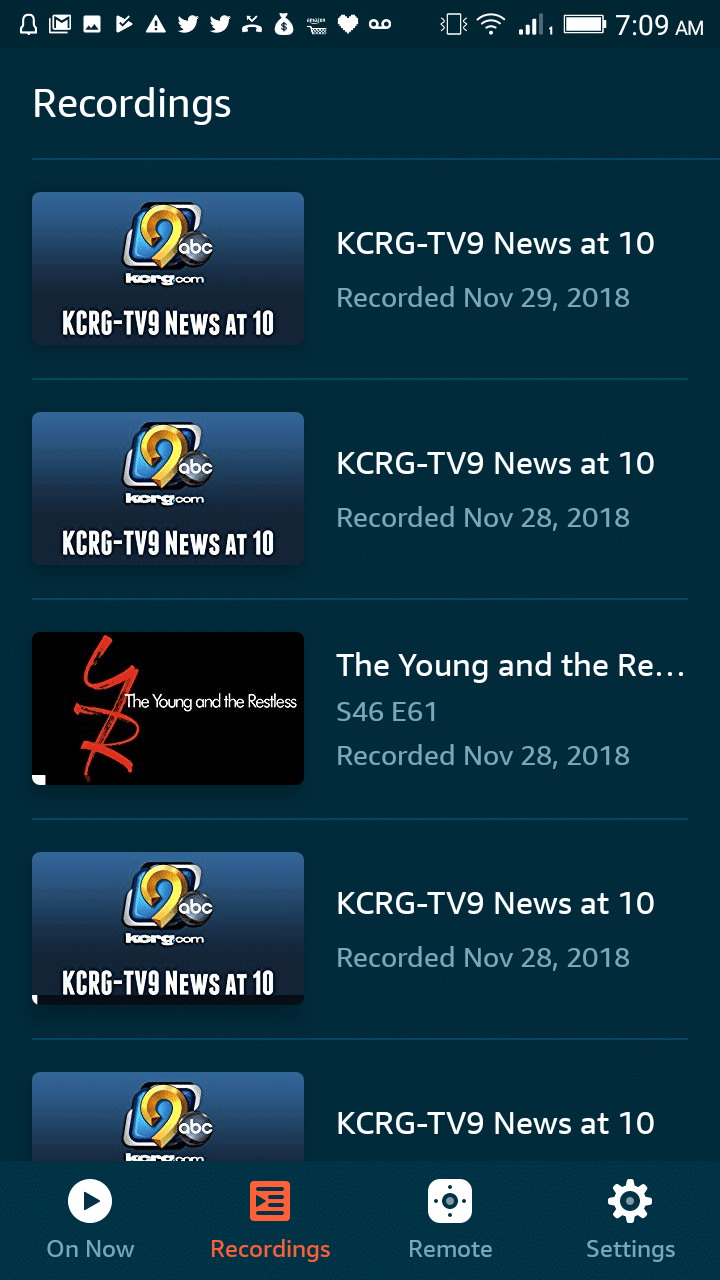 You may customize various features through the included Settings panel in the app. 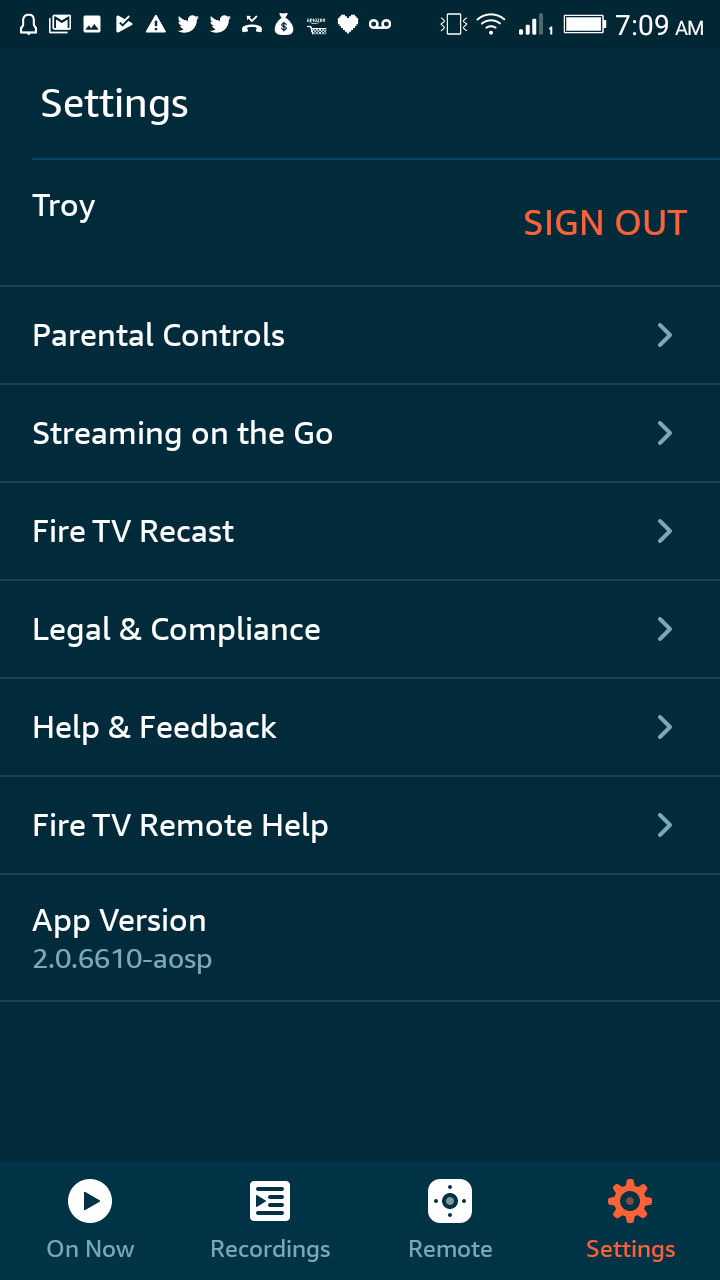 Cancel a recording – Alexa, cancel my recording of “Name of TV Show”.

See your storage usage – Alexa, how full is my DVR?

Note:  You can use Alexa to control Fire TV Recast on any Fire TV streaming media player with an Alexa Voice Remote, Fire TV Edition television, or Echo Show. You can also use other Echo devices for requests that don’t require video playback, such as scheduling, cancelling, or deleting recordings.

You will notice a USB port on the back of the device which doesn’t do anything as of this review.  Rumor has it that Amazon will be rolling out a firmware update in the future which will activate this and allow for additional external storage.

My Thoughts On The Amazon Fire TV Recast

The Fire TV Recast does a fabulous job but the question is whether most people really need it.

There are other competing products such as the Tablo that work extremely well and provide the same functionality plus you can use it on non-Amazon devices.

One of the main drawbacks of the Fire TV Recast is that it lives within the Amazon Ecosystem only.  What I mean by that is that we can’t play-back live television or recorded TV shows on an NVIDIA SHIELD or other streaming devices that aren’t compatible.  Maybe this will change in the future with a compatible app but I highly doubt it.

If you only have Amazon devices within your home, this is a great choice.

But, here is the big question.

What do you plan on recording that isn’t available through various apps such as Cinema APK, Kodi, etc.?

Keep in mind that this device is only capable of recording over-the-air television and not cable, satellite, or IPTV.

Prior to purchasing the Fire TV Recast, I had to switch my TV input to “Local TV” with the television remote to watch over-the-air broadcasts.  Also, there is no electronic program guide for my channels on my television.

Now, I can stay within the Fire TV interface and watch all of these live stations (with a program guide) without picking up the TV remote which is very handy.  Would I pay over $200 for this time-saver?  No.  And the reason why I say no is because I personally don’t watch many of these channels, however this may be different for you.

The determining factor on whether you would buy something like this all depends on your viewing preferences and budget.

There is no doubt that this is a quality device and I would certainly recommend it to those who use Amazon products exclusively.

Will Fire TV Recast work with all Fire TV devices?

How do I setup my Echo Show to work with the Fire TV Recast?

Your Fire TV Recast and Echo Show will pair automatically if they are both connected to the same WiFi network and you are signed into both devices using the same account.

Can I record IPTV with my Fire TV Recast?

No, the device will only record local over-the-air channels that are received by an HDTV antenna.

Will the Fire TV Recast work with my existing antenna or do I need to purchase a special one?

Yes, your Fire TV Recast will work with any indoor or outdoor digital HD antenna.

How Many Fire TV Recasts can I register to my Amazon Account?

You may register one Fire TV Recast per Amazon account.

How Many devices can I pair with the Fire TV Recast?

There is no limit, you can pair your Recast with as many Fire TV compatible devices as you would like.

Fire TV Recast is capable of receiving all ATSC broadcast resolutions, including 1080i and 720p. When streaming to other devices, Fire TV Recast transcodes 1080i streams to a resolution up to 1440 x 720p using H.264. This is to ensure that all Fire TV streaming media players work with Fire TV Recast, and to deliver more reliable video streams over Wi-Fi.

Thank you for reading my Fire TV Recast Review!

Please tell us in the comments below if something like this would be of value to you and why/why not.