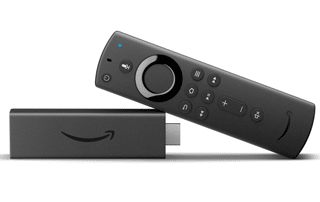 This unbiased review was developed by Troy from TROYPOINT and is considered a “must-read” prior to buying.

This new device is the replacement for the Fire TV 3 (Pendant).

You may now order here through the Amazon Website.

In my opinion, this is the best streaming device on the market at this time due to its low price-point and outstanding features.

This new device includes 1.5 GB of DDR4 RAM, 8GB internal storage, and a 1.7 GHz quad-core CPU, and Technologies PowerVR GE8300 GPU.  This is the most powerful Fire TV device available for purchase at this time and it surpasses the Fire TV 3 Pendant.

The Fire TV Stick 4K supports Dolby Vision, HDR10, and HDR10+.  It also supports Dolby Atmos surround sound, which the true audiophiles have been waiting for in a streaming device.

Amazon is also showcasing their new WiFi antenna technology in this device, that they created themselves.

In my testing, the WiFi performed extremely well and in my opinion, there is no need to use the separately sold Ethernet adapter.

One very noticeable upgrade is the new remote that comes with the Fire TV Stick 4K.  You will now be able to control your compatible TV, sound bar, and receiver with the new power, volume, and mute button. 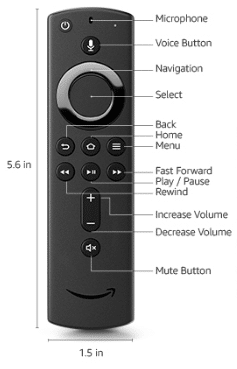 Best of all, you can do everything with the voice-activated feature, similar to the Amazon Fire TV Cube.

I really like this new remote due to the volume and power buttons.  In the past, I always had my TV remote near, specifically to control the volume of the television.  I don’t need that anymore with this new remote!

The remote is also capable of Alexa voice commands by using the built-in microphone by way of the Voice Button.

Please understand that it is impossible for me to provide comparisons for every streaming device on the market.  I try to make comparisons where necessary throughout this review. 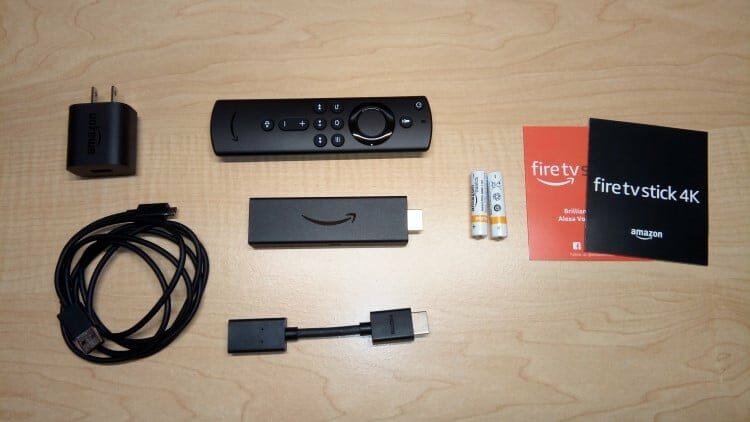 It is pretty much dumby-proof and Amazon does a great job of walking you through each step.

One nice feature is the automatic updates that take place immediately when you first connect to your WiFi network or Ethernet adapter. 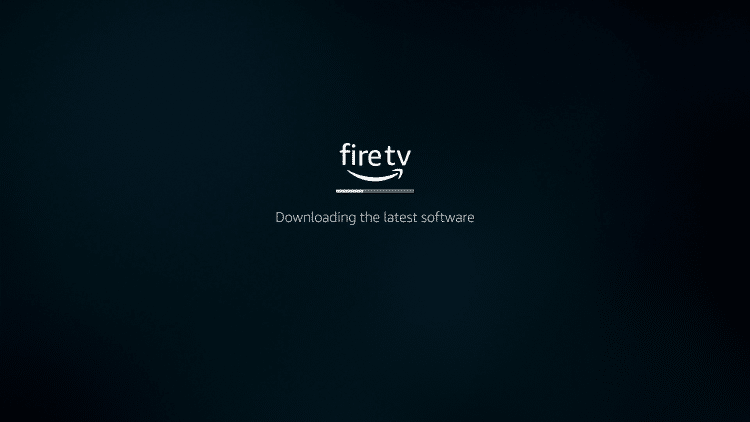 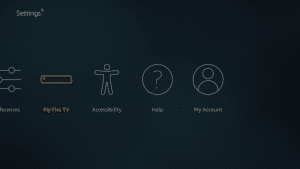 The Fire TV Stick 4K setup process if very similar to the other devices in the lineup.

Our favorite tool for installing various applications, Downloader works exactly how it should, and it can be installed through the Amazon App Store.

You can also dive into the settings area and turn on Apps from unknown sources and ADB Debugging if needed.  Users can access this area by clicking the “My Fire TV” option in the settings area.  On older Fire TV models, this is usually labeled as “Device”.

Again, the user interface is very similar to the other Fire TV devices that have already been released by Amazon.

As of this review, one app that is not showing up in the Amazon App store is the popular file manager ES File Explorer.  I am sure this will be fixed soon but in the meantime, we can always use Downloader and/or Total Commander. 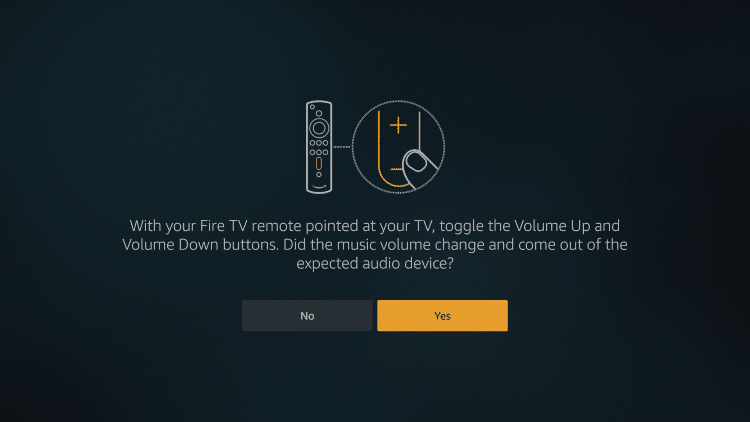 As I mentioned earlier, I really like this new remote that comes equipped with power and volume buttons that will control your television, soundbar or other peripherals of your choice.

Pairing your Fire TV Stick 4K remote with your television is simple.

You are first asked to pick the model of television that you are using from a list (Vizio, Samsung, LG, etc.).

You are directed to point your remote at the TV and then toggle the volume buttons up and down.

When you do this, your television will pair with your remote and you will be all set.

If you would like to control a different device with those buttons, you can easily configure that within the Settings area under “Equipment Control”.

One of the most popular questions is whether side-loaded apps such as Kodi and Cinema APK will install and work properly.

I am happy to report that they do and you can easily install everything with the TROYPOINT Rapid App Installer in a matter of minutes. 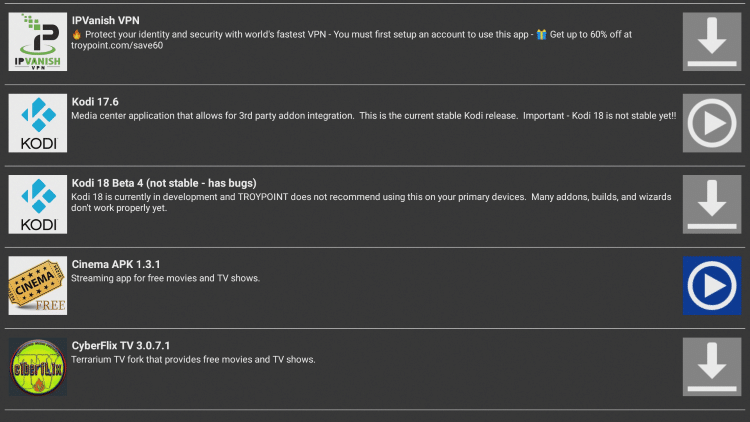 IMPORTANT: If you’re trying to install unverified apps into your Firestick or Fire TV from the Amazon App Store, you can only complete it by side-loading or installing anything into your device without using the official app-distribution method. I recommend using a VPN to install such apps. Click this link to learn how to install a VPN for Firestick, Fire TV, Fire TV Cube.

One of the major differences between this new Firestick and the 2nd Generation model is that it is capable of playing 4K video.

It does a fabulous job of doing so and you will see in the image below that the system resources don’t come close to maxing out. 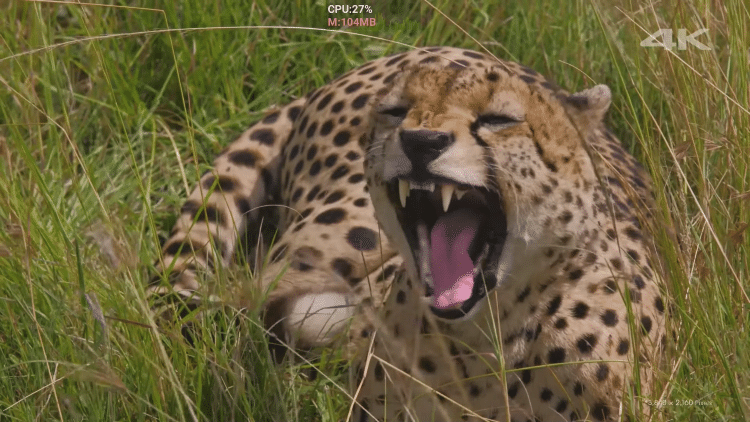 This video is being played through YouTube and you will notice that only 27% CPU and 104 MB of RAM is being used.  All 4K videos that I tested played incredibly well with no buffering whatsoever.

I am using Cool Tool in this testing process which measures the system resources.  This tool can be installed through the TROYPOINT Rapid App Installer as well.

It’s important to note that you don’t need to own a 4K television to use this device.  4K is simply the max resolution that the Fire TV Stick 4K will deliver.  If you have an HDMI input on your television, this new FireStick should work great for you.

The Fire TV Stick 4K is capable of Dolby Atmos, 7.1 surround sound, 2-channel stereo, and HDMI audio pass through up to 5.1.  This is a big benefit to those audiophiles who posses the proper equipment to realize this incredible sound.

The Fire TV Stick 4K is now the most powerful device in the Amazon lineup that is available for sale today.  The processor surpasses the power of the Fire TV Cube, Fire TV 3 (Pendant), and 2nd Generation Fire TV Stick.

The 2nd Generation Fire TV still packs the biggest punch when it comes to power but unfortunately, these are no longer sold by Amazon.

The following screenshot illustrates the resources being utilized by a popular IPTV application while playing a live 1080p stream. 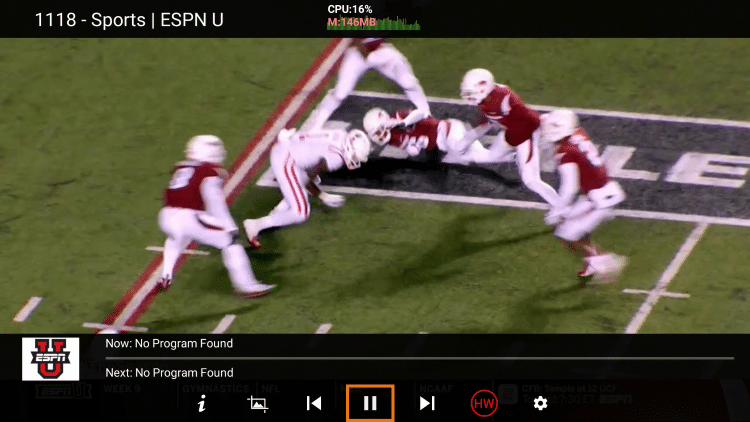 As you can see above, the device is using very little resources while playing this stream (16% CPU & 146 MB RAM Memory).

One complaint from past models is overheating.  I have been continually checking the heat that is radiating off this new FireStick and haven’t noticed any problems yet.

I tested download speeds on each Fire TV model in the current lineup to give you a good reference on how this new device compares to the others.

For consistency, I used the same Website for measuring download speed which is the Netflix fast.com speed tester.  I tested each scenario five times and calculated an average which you will see below.

I connected through my 5GHz band on my router for the wireless tests and I currently have 150 Mbps plan through Mediacom Cable.

I also used IPVanish as my VPN with the Chicago 02 server when connecting with a VPN.

Note: The Ethernet adapter (sold separately) for the FireStick is capable of speeds up to 100 Mbps and the wireless adapter can reach speeds much higher than that. This is the reason the wireless connection works better than wired on this device. 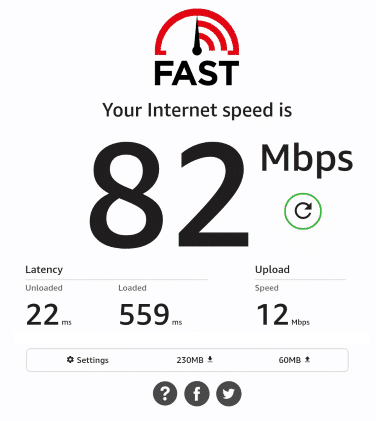 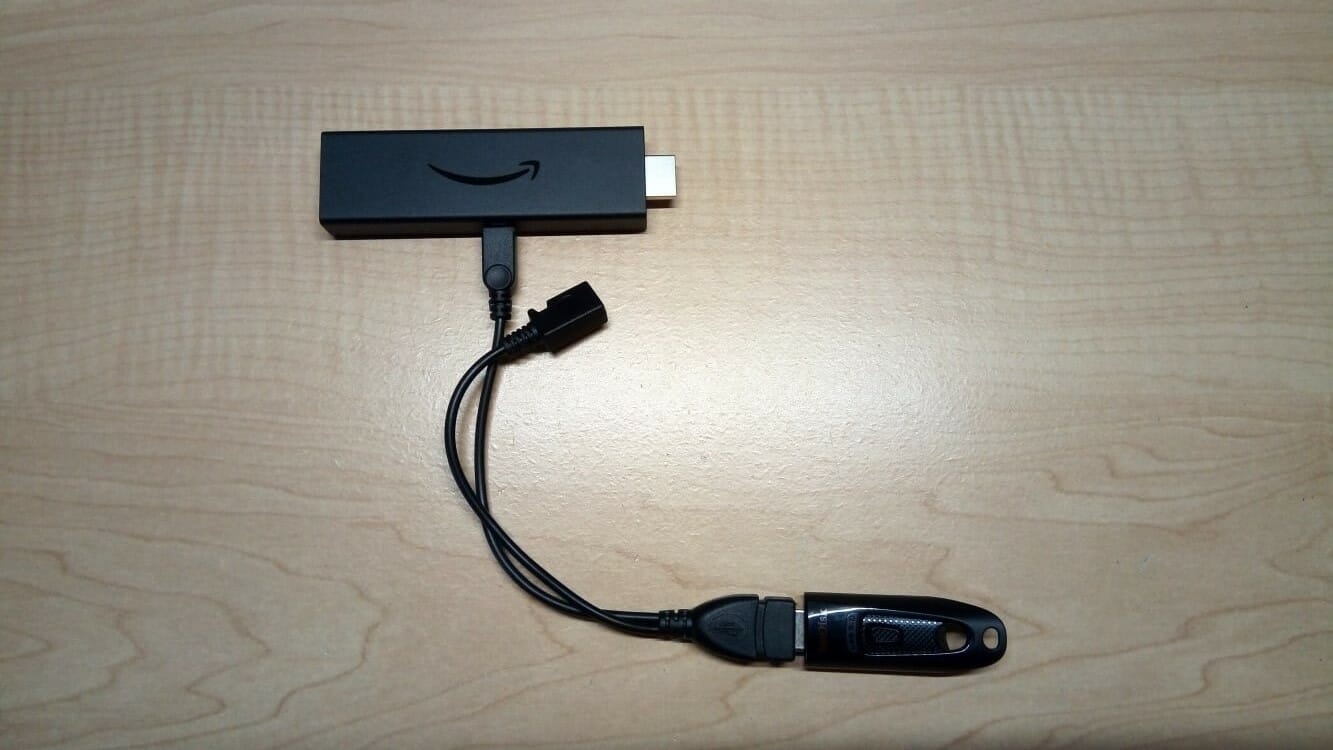 The USB OTG Adapter (sold separately) appears to work similar to the 2nd Generation Fire TV Stick, which will be a sigh of relief for those who use peripheral devices.

I plugged in my SanDisk Ultra USB 3.0 256 GB flash drive and it was recognized by the Fire TV Stick 4K by an empty box in the bottom right corner of the screen.  Usually there is a popup message indicating that the drive has been mounted, but as of this review, there is no wording, just a blank box.

I am hopeful that this will be addressed in a future update.

Unfortunately, we aren’t able to expand the storage through an external drive like we can on the Fire TV Cube.  But, a USB drive is recognized by all apps automatically once it is plugged in, a key feature missing from the Fire TV 3 (Pendant).

My USB drive consisted of both a movies folder and rom directory for some old-school gaming emulators.

The movies played great in Kodi with lighting fast reaction to the playback buttons and the roms loaded as well in RetroArch (tutorial coming soon for this).

I also connected one of my IPazzPort Wireless keyboards to the OTG cable as well and it worked as expected.

I feel that the Amazon Fire TV Stick 4K is one of the best streaming devices in terms of pricing and available features.

I personally like this unit better than the Fire TV Cube and Fire TV 3 (Pendant).  It’s a more powerful device and again, the price is right.

If you are trying to decide between the 2nd Generation Fire TV Stick and this new Fire TV Stick 4K, the extra ten bucks is well worth the upgrade that you will get with this new device.

For those of you still using the 1st Generation Fire TV Stick, yes, this is a no-brainer, upgrade!

If you own a 2nd Generation Fire TV box, Fire TV 3 (Pendant), or Fire TV Cube, this may be a more difficult choice on whether you want to upgrade or not.  Each of these devices will play 4K video.  The new remote and audio options may be enough to push you over the edge.

The one area where I feel that Amazon could have made an improvement is by increasing the Memory (RAM) to 3 GB.  But, in all fairness, during my tests, the RAM never spiked above 250 MB which shows there is still plenty available.

I also hope that a future update will fix the OTG shortcomings mentioned earlier when connecting a USB drive to the device.

Will this fix buffering?

If you are using an older streaming device, yes, this could help.  You can use the same application that I used when performing this review which is called Cool Tool.  This app allows you to test your available resources on your Fire TV/Stick or any Android device.

Also, sometimes it helps simply resetting your device to factory default settings and then reload all of your applications.

The Cool Tool is available for quick install through my TROYPOINT Rapid App Installer.

Keep in mind that the main reason for buffering is low Internet download speeds.  I suggest first testing your Internet speed on your Fire TV/Stick directly.

IR Device Control with included all-new Alexa Voice remote:  The included all-new Alexa Voice Remote can control the Fire TV Stick 4K and certain functions (such as power and volume) on a wide range of compatible IR-enabled devices, including TVs, soundbars and A/V receivers. Note: Certain functions may not be available on some IR-enabled devices. 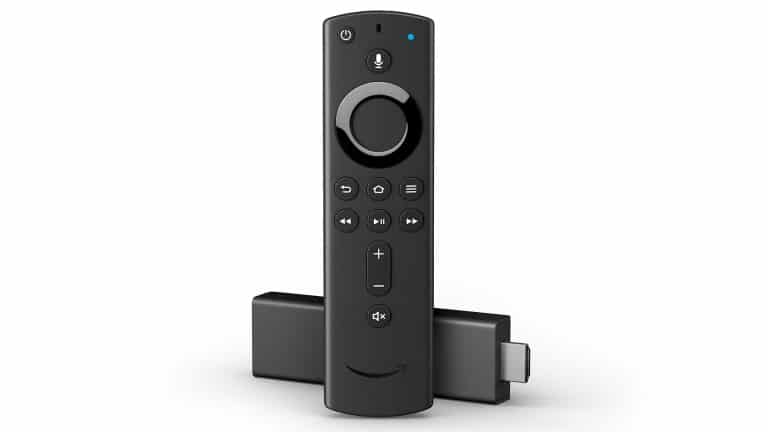 I conducted a drawing earlier this week for 10 Fire TV Stick 4K devices.  Below are the winners.

Winners have been notified by email or direct message through Twitter with instructions for claiming prize.  Thanks to all who participated.  Many more contests/drawings on the way!

I will continue adding to this post as new comparisons are made.

Tell us in the comments what you think about this new Fire TV Stick 4K by Amazon.