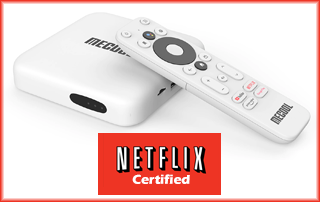 This streaming device was provided free of charge to TROYPOINT by MECOOL. However, this review is unbiased and you will see that I point out both the good and bad regarding this Android TV Box. MECOOL did not have access to this post prior to publishing.

I’ve also provided a setup video below due to the numerous people trading in their Fire TV Sticks for the KM2.

MECOOL KM2 – Features at a Glance

The MECOOL KM2 is a new Android TV Box that supports Netflix in 4K quality.

MECOOL is no stranger to Android TV Boxes but this is the first one that allows for 4K playback within Netflix.  This has always been the main complaint when it came to their past devices. 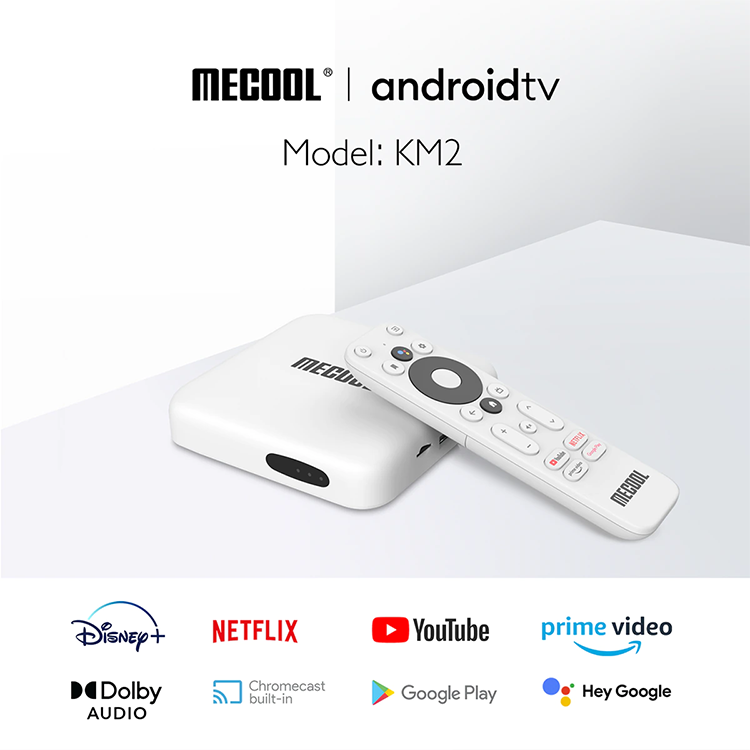 The reason many Android Box manufacturers don’t provide Netflix support is due to the licensing requirements that probably require fees as well. 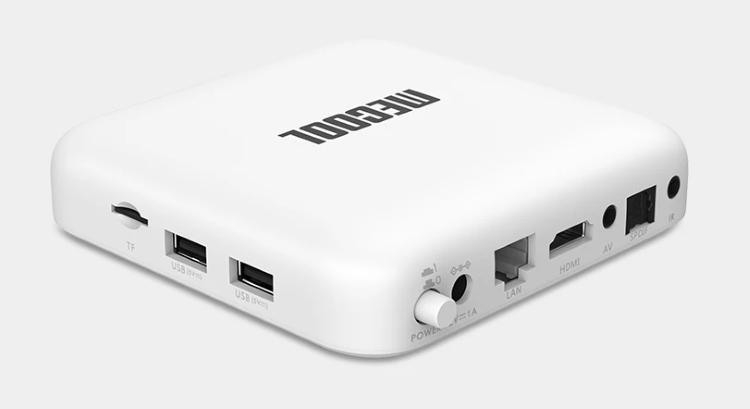 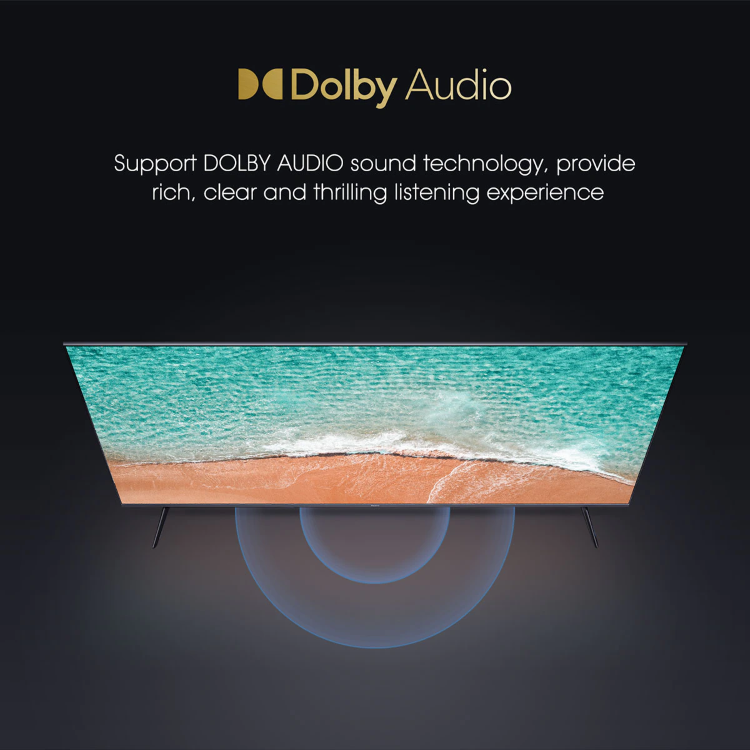 Chromecast is also built-in which means you can easily stream media to the KM2 from your phone, tablet, or laptop. 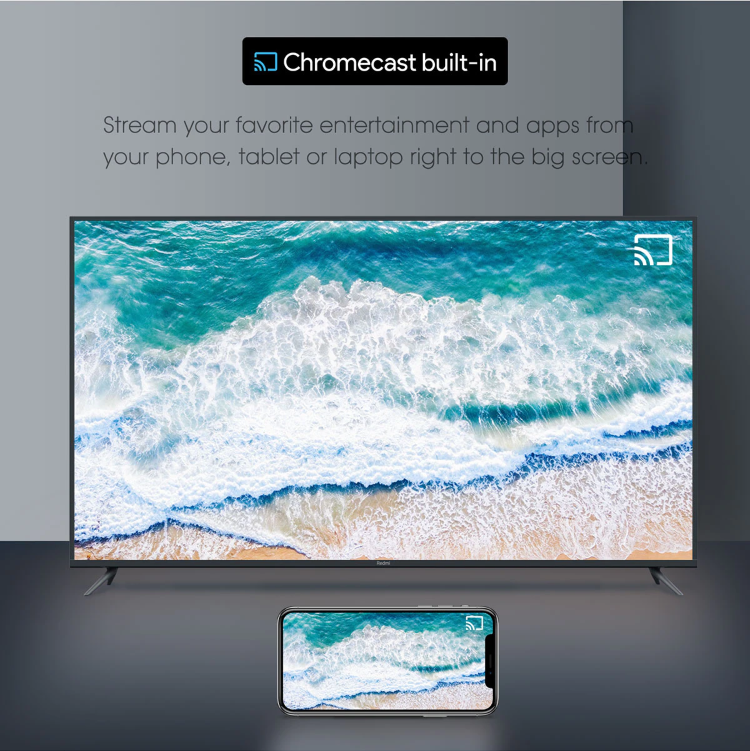 The remote is absolutely fabulous.

There are four shortcut buttons available on the MECOOL KM2 for YouTube, Netflix, Amazon Prime Video, and Google Play.  These buttons are truly handy for those who use these apps on a regular basis.

You will also see an up/down button on the right side of the remote.  This is great when scrolling up or down a page within a browser or streaming application.

Google voice assistant is available along with many other shortcuts.

The only button that’s missing is a mouse pointer for apps that don’t work well with a remote control that we sideload.

Setup was straightforward forward just like most Android TV Boxes. 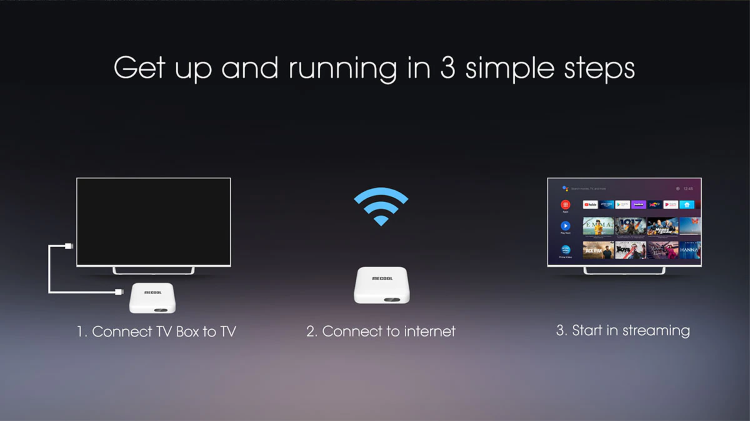 It’s important to point out that this is running Android TV and not stock Android which is found on phones, tablets, and generic Android boxes.

Android TV is optimized for the television experience and remote control.

Read about differences between Android TV and stock Android found on generic boxes in our guide linked below. 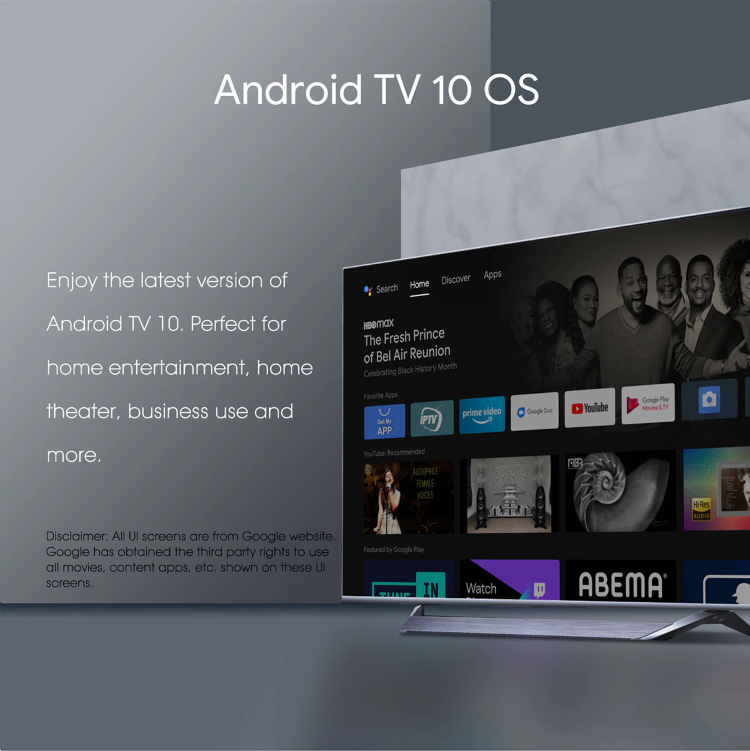 I’m happy to see that the MECOOL KM2 box is not using Google TV which is a derivative of Android TV.  Google TV is found on the Chromecast with Google TV and includes numerous ads for streaming services.

This version of Android TV is more bare-bones which I like more as I don’t use a lot of paid services.

Plus, you can easily modify the home screen with this version and you can’t do that on Google TV. 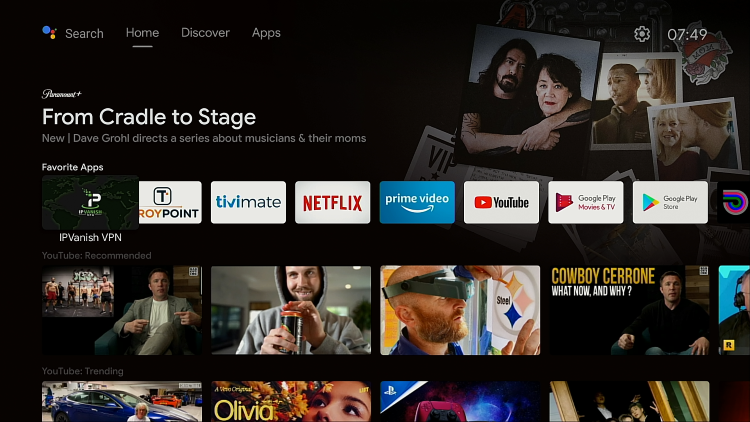 The first thing I did during this MECOOL KM2 review was dive into Netflix since that is the main new feature of this Android TV Box.

I was happy to see that the Netflix app isn’t a hacked version that tries to get around the certifications.  It’s the real deal and it works excellent!

I also tested Amazon Prime Video and YouTube with both working great in 4K quality.

Next, I installed the TROYPOINT Rapid App Installer and sideloaded the popular free streaming apps.  I also installed TiviMate as this is what I use for my primary IPTV player.

All of the sideloaded applications worked as expected and so did my IPTV service.

I recently reviewed the MECOOL Now Android TV Box and that one didn’t allow for sideloading apps.  I’m glad to see that they didn’t make that mistake again.

I used the MECOOL KM2 as the primary streaming device in my office for three days and I can say that I am pleasantly surprised.  It performs great and I really like the remote control.

There are a few things that bother me a bit such as small storage at only 8GB, only 2GB of RAM, and the Ethernet port is standard, not Gigabit.  But, we need to remember that all of these additions cost money and they probably had to pay the Netflix licensing which kept some of those features out.

The MECOOL KM2 does allow for expanding storage though!  And it is extremely easy which I will demonstrate in the next section.

I also show how to expand storage in the video above.

I first enabled Developer Options by going into Settings / Device Preferences / About / clicked the Build menu item 7 or 8 times.  I then went back to one screen and into Developer options where I enabled “Force allow apps on external”. 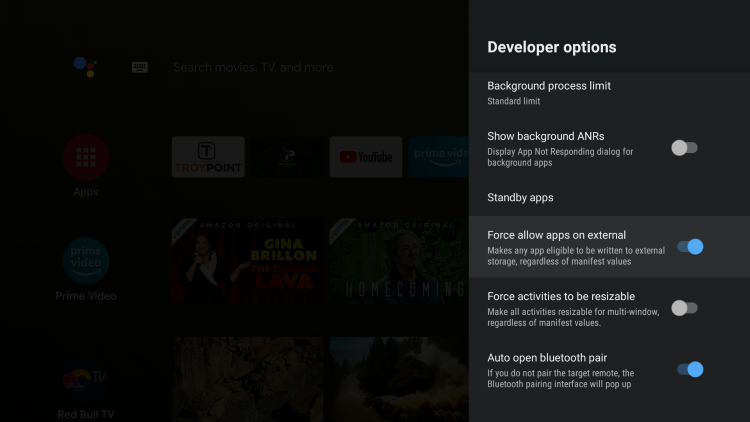 I then inserted a 256GB SandDisk 3.0 USB Drive into the unit and formatted it as internal storage and it worked exactly like it would on the NVIDIA Shield.  Great news!

From now forward, all applications that I install on the MECOOL KM2 will be added to the USB drive.  I can also go into each application through settings and move apps to and from the USB drive if I would like.

I first started with my USB drive in the 3.0 slot but for some reason, the system was very laggy.  I then moved it into the USB 2.0 slot and everything worked fine.

I used the Analiti Speed test app for the following tests.

I have one GB Fiber download speed plan through my Internet Service Provider.

During the WiFi tests, I am connected to the 5Ghz band on my Asus AC3100 Router.  This router resides in the same room as my MECOOL KM2 Deluxe (approximately 20 feet away from the wireless router). 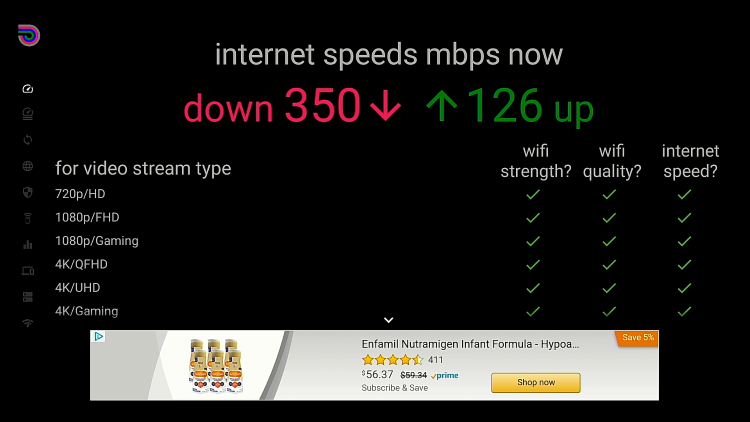 Note:  The reason for faster WiFi speeds is because the Ethernet port is only capable of 100 Mbps.

Since the MECOOL KM2 Android TV Box doesn’t come with a Gigabit Ethernet port, I decided to connect my UGREEN USB 3.0 Gigabit Hub.  I wanted to test download speeds through this Gigabit adapter.

Here’s what I got.

I paired my NVIDIA Shield game controller with the MECOOL KM2 and tested some of the more popular games. 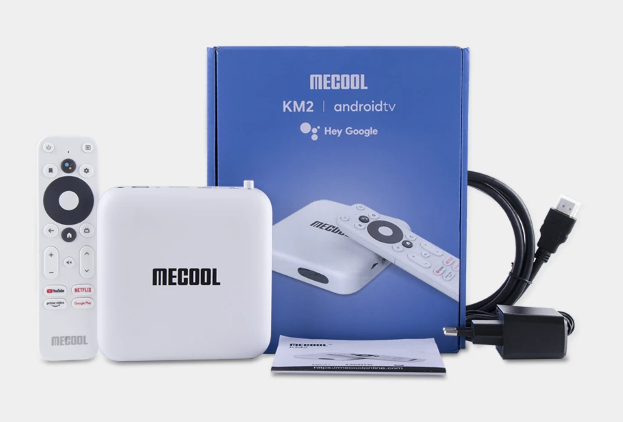 While I was doing this MECOOL KM2 review I kept thinking back to the recent Android TV Boxes that they’ve released.  Most MECOOL Android TV Boxes come with increased storage and RAM memory.

I then quickly remembered that this one incorporates Netflix which I’m sure cost some money to license.  Don’t even get me started on this licensing fiasco.  Netflix should allow all manufacturers to integrate their application at 4K playback for free.

There is no doubt that MECOOL wants to compete with the likes of the other less expensive devices such as the Fire TV Stick and Chromecast with Google TV.  They simply can’t do that by increasing storage, RAM, and providing a Gigabit Ethernet port.  Everything costs money.

So, when I look at this streaming device, I try to compare it to the other systems in the same price range.

I think this device compares most closely with the Chromecast with Google TV.  But, I like this MECOOL Android box much better for a few reasons.

The MECOOL KM2 allows for peripheral devices by way of two USB ports, an SD card slot, Ethernet port, SPDIF Optical, etc.  To get all of that on the Chromecast, you will need to purchase a hub so your price will be higher than this one at the end of the day.

I also like the KM2 remote control better than the Chromecast with Google TV.

It also has twice the storage as the Chromecast with Google TV as well.

This comes with true Android TV and we can edit the home screen.  Can’t do that on Chromecast as theirs comes with Google TV which is full of ads for services I will never use.

This Android TV Box comes with a standard Ethernet port and some will complain about it not being Gigabit.  My comment to that is how much download speed do you really need?  You only need 20 Mbps to stream 4K and anything more than that is overkill.

The small 8GB internal storage argument is the same.  How much storage do you really need?  I personally use 3 to 4 apps on my devices so the lack of storage on these boxes has never been a big pain point for me personally.  But, we can easily expand internal storage with a USB drive if necessary!

All in all, this is a great streaming device and it’s nice to see that MECOOL has finally integrated the official Netflix application.

For these reasons and more, we have included the KM2 in our lists of Best IPTV Boxes and Best Streaming Devices.

If you want a device with additional storage and RAM, I would suggest looking at MECOOL’s other Android TV Boxes.  If Netflix isn’t important to you, there are other models that sport up to 64GB onboard storage and Gigabit Ethernet.

I hope that you enjoyed my MECOOL KM2 review!