Hulu Live TV Review – Everything You Need To Know

This article will provide you with a complete Hulu Live TV Review.

It can be installed on any device including the Amazon Firestick, Fire TV, Fire TV Cube, Roku, iOS and Android phones, and more.

To stream Live TV, you need a high-speed and stable internet connection, streaming device such as smart TV or Amazon Firestick, and a subscription to a streaming service.

You can also install a digital antenna should your live TV streaming service provider offer no over-the-air TV networks such as ABC, CBS, FOX, NBC and PBS.

If you want reliable, high-quality television with no buffering, TROYPOINT suggests purchasing a paid IPTV Service.

These services provide hundreds if not thousands of live HD TV Channels for a small monthly fee.

Hulu’s popularity began as a Movie & TV Show streaming service and alternative to Netflix. However, it has morphed into something much more. This service now offers Live TV along with your favorite Hulu programming.

Hulu provides one of the most affordable live TV streaming packages today. Viewers can enjoy more than 60 channels consisting of original shows as well as other live TV programs such as sports, news and entertainment if they subscribe to the Hulu + Live TV plan.

Hulu is compatible with most popular devices such as the Amazon Firestick, which is perfect for cord-cutters. It’s a preferred choice by many entertainment fans and streamers who want the best entertainment experience for a reasonable price.

Use the link below for get your free trial subscription:

Hulu is one of the most popular IPTV services available today. In Q1 of 2019, the company claimed that it already has 28 million U.S. subscribers. It added 3.8 million new subscribers, outpacing Netflix’s 1.74 net additions by more than half in the same period.

Its current lineup of exclusive TV shows include Killing Eve, Adventure Time and I am the Night plus past favorites such as King of the Hill, Prison Break, ER and Futurama. It also offers exclusive movies that include comedy, documentary, action and drama flicks.

Hulu also continues to expand its offerings. Recently, they signed a contract with Lionsgate that grants them exclusive TV rights to stream the film production company’s movies in 2020 and 2021.

Kids, on the other hand, can enjoy 24/7 programming on Cartoon Network, Nickelodeon, Universal Kids and Disney+ (depending on the bundle plan).

Hulu lowered its monthly basic plan from $7.99 to $5.99/month in February 2019, which partly explains why its subscriber base surged in Q1.

Some analysts also attribute it to the addition of Disney+ in its lineup, as well as the hike in Netflix’s monthly fees.

For viewers who do not want ads, the Hulu (No Ads) plan is offered at only $11.99 a month, with the first month’s fee also waived for new subscribers. Viewers can download from thousands of titles that they can watch offline too.

Finally, the Hulu + Live TV plan is now at $54.99 per month (since Hulu hiked the price from $44.99 in the middle of December 2019). Viewers can enjoy more than 60 channels of live and on-demand programming plus unlimited access to Hulu’s streaming library.

They can also record live TV with 50 hours of cloud DVR storage to boot.

Free trials for this plan are available for new and returning subscribers too.

There’s also a bundle for sports and Disney fans. The Hulu, Disney+, and ESPN+ plan lets viewers access their favorite shows from these channels for only $12.99 a month.

Take note that content from these three streaming services can only be viewed on their respective apps and are limited only to subscribers in the U.S. In addition, there is no free trial available for this bundle.

Subscribers can switch plans or cancel their subscription anytime on any plan too.

For such monthly cost, Hulu offers one of the most affordable plans in the market today. However, it can rack up when subscribers decide to have add-ons.

Those subscribed to the Hulu + Live TV plan can enjoy the Enhanced Cloud DVR feature (up to 200 total recording hours) and unlimited screens for $9.99 each.

Spanish language streaming and on-demand content from Spanish networks are also available through the Español add-on for $4.99 a month.

If these additional networks and features don’t mean so much to you, you can choose to stick to the standard Hulu plan for less than $6 a month.

The user interface has been updated in October 2019 to make menus easier to read, improve accessibility to each feature, and keep navigation more user-friendly. I used to complain about the text’s visibility on the interface but now, the changes have greatly improved the design. 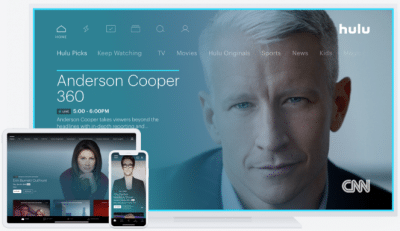 The live TV grid guide is a feature that I enjoy the most. It categorizes shows based on sports, news, movies and kids plus the recent shows and channels that I’ve watched.

As a heavy channel surfer, it’s a feature that appeals to me a lot. It also lets users plan their recording up to 14 days ahead so they won’t miss their programs.

Plus, there’s the picture-in-picture mode so users can continue watching a streaming show while scrolling through other content on the menu.

In terms of the Hulu app on mobile, there was nothing to complain about. It was easy navigating through the features, browsing shows, and even accessing the My Stuff section that allowed me to manage my DVR storage without a hassle.

It’s only recently that Hulu has started offering shows in 4K streaming but only on the Firestick, Chromecast Ultra, Apple TV (5th generation or later) and some select devices. However, as of this writing, the shows are also limited to Hulu Originals only.

I find this really necessary if you want to optimize your viewing experience. It’s a good deal for a very affordable monthly subscription fee. And if you’re watching live TV, the best resolution and cloud DVR recordings you can get is 720p/60fps HD even on a Firestick.

As long as you maintain a stable bandwidth, you’re sure to get a decent picture and streaming quality with Hulu. I found no issues with this when testing the service for weeks now.

The quality of the recording, in my opinion, is pretty decent, and I found no bugs during multiple tests. The downside? Users have to upgrade to the Enhanced Cloud DVR add-on to fast forward through the ads.

On the other hand, paying an additional $9.99 for this feature comes with 200 hours of storage too so there’ll be more shows to record.

I tried creating a Kids Profile to restrict access to some content and it worked perfectly fine. Hulu’s parental control is an easy-to-use feature that keeps kids safe from watching adult-related content on the streaming service.

The ad-supported plan may be very cheap but this can be frustrating to most subscribers who switched to cord-cutting in the first place. Ads are a big source of revenue for Hulu, which retains between 30 percent and 50 percent of ad revenues that it distributes.

The Hulu (No Ads) plan does not really mean that all programs are ad-free too. As explained in their website, some shows still contain ads due to streaming rights rules.

Thus, fans of Grey’s Anatomy, Marvel’s Agents of S.H.I.E.L.D. and How to Get Away With Murder have to contend with short ad breaks before and after each episode. Still, there are no ads in the middle of the shows.

If you’re not using compatible devices to stream Hulu, you can use the classic Hulu app to access the streaming library from Apple TV (2nd and 3rd generation only), select LG TVs, Roku models, Samsung, VIZIO and Sony TVs, and TiVo. The downside, however, is that you won’t have access to live TV and some add-ons offered.

Based on my experience with Hulu, I’d say that the service is good enough to cut the cord.

The Hulu + Live TV plan is reasonably priced and can match other streaming services’ features. What I would want to see in the coming year is a huge improvement in the number of 4K content not limited only to its original programs.

It would also be great to increase the cloud DVR storage since YouTube TV already offers an unlimited space to its subscribers.

Overall, Hulu is great for those looking to enjoy VOD. While the Live TV option also works great, it may be more expensive than most want to pay.

For cheaper IPTV alternatives, use the complete TROYPOINT IPTV Page below:

What is Hulu Live TV?

Hulu Live TV is a streaming service available for installation on streaming devices such as the Amazon Firestick to watch Live TV.

Yes. Hulu Live TV is a verified service and is 100% legal to use.

What devices can Hulu Live TV be installed on?

Hulu Live TV is available for installation on tons of devices including the Amazon Firestick which is the most popular streaming device available. Users can also download on Android and more.

What channels does Hulu Live TV have?