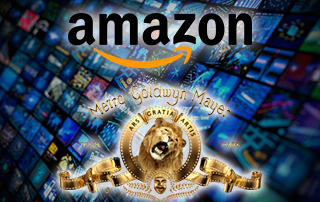 It was recently announced that Amazon is buying MGM in a multi-billion dollar deal.

There have been rumors over the past several months of Amazon looking to acquire MGM, and now the deal is official.

This latest agreement is Amazon’s second-largest purchase behind their Whole Foods purchase in 2017.

“The real financial value behind this deal is the treasure trove of IP in the deep catalog that we plan to reimagine and develop together with MGM’s talented team. It’s very exciting and provides so many opportunities for high-quality storytelling.”

The press release also highlights the following details regarding the purchase of MGM:

We can expect MGM titles to appear on Prime Video and other outlets that users can access with an Amazon Firestick/Fire TV.

This deal emphasizes the premium Amazon is placing on streaming and its positioning in this competitive market.

Last week we saw AT&T Partner with Discovery to combine media assets and bulk up their market share.

And with NBC’s successful launch of Peacock TV in 2020, the streaming war for subscribers will only continue.

MGM Chairman of the Board, Kevin Ulrich, also stated his thoughts on the merger:

“It has been an honor to have been a part of the incredible transformation of Metro Goldwyn Mayer. To get here took immensely talented people with a true belief in one vision. The opportunity to align MGM’s storied history with Amazon is an inspiring combination.”

For more information on Amazon buying MGM, you can check out Amazon’s official press release below.

Overall, it will be very interesting to see how this merger plays out and what kind of impact this will have on the streaming industry as a whole.