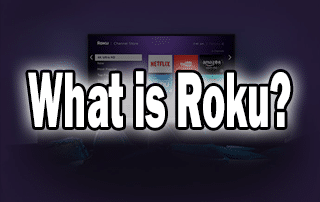 The following article will explain What is Roku and answer any questions you may have about this media streaming device.

Roku is regarded as one of the top brands in the streaming market and has been popular among cord-cutters since the first version was launched in 2008.

It’s functionality and features rival that of the Amazon Firestick, another popular streaming media player that ranks at the top of home entertainment streaming technologies.

Using a streaming device such as Roku or Amazon Firestick lets you access movies, news, TV shows, podcasts and music without having to download them to your hard drive. This saves you a lot of storage space in your devices.

Because streaming sticks are designed to be handy, you can take your mobile entertainment system wherever you go.

There are thousands of content options you can choose from to suit your video and audio streaming preferences.

There are several apps available for movies and TV shows, live TV, 24/7 sports, music, etc. to turn your streaming device into your personal mobile media hub.

This article is organized into the following sections:

Roku is a brand of digital media players that was first founded in October 2002 by the founder of DVR manufacturer ReplayTV, Anthony Wood.

Named after the Japanese language term for “six” (since it was Wood’s sixth startup), the company was incorporated in early 2008 when Netflix dismissed the plan of building its own streaming player.

Wood, Netflix’s Vice President at that time, was successful at securing the media services provider’s investment to build the first Roku device.

Roku has since become extremely popular among cord-cutters when it went public in 2017 with $1.3 billion in stock market valuation.

Today, Roku is known for its streaming sticks that cater to budget-conscious cord-cutters.

However, they also offer other devices such as soundbars and smart TVs for those who want to level up their entertainment experience.

The Roku series of streaming players have gone through eight generations already. The original streaming receiver box, Roku DVP, was developed in 2008 for Netflix streaming and was limited to show only SD content.

In 2011, the second generation was launched with the introduction of Roku 2 XS and the budget friendly Roku LT.

In 2013, the Roku 3 was introduced as the third generation of player that featured a better CPU compared to its predecessors with a Wi-Fi Direct remote system.

Then came the next generation with Roku 4 in 2015 that was already capable of 4K video streaming.

Less than a year after, the fifth generation was launched with Roku Express and Express+, Roku Premier and Premier+ and Roku Ultra.

These models were then further upgraded as part of the next generation in 2017 along with the Streaming Stick+.

The seventh generation introduced in mid-2018 had minor product enhancements.

In 2019, the latest generation made its way into the market with a smaller Roku Express, a new operating system (OS) version, and better compatibility.

Netflix, however, has stopped supporting older Roku devices such as the Roku SD, HD, and HD-XR. You can get to know more about this in our previous post below.

What is the Roku Streaming Stick+

The Roku Streaming Stick+ remote control features shortcut buttons where selected services are assigned on each. This is convenient for users who want to switch from one service to another.

Roku has a simple setup process by plugging it into the HDTV and connecting it to the network to start streaming.

Roku supports voice search via the free Roku mobile app and is also available for the Roku stick models but not for the Express and Premier series. It works with Alexa and Google Assistant.

If you’re planning to stream in your basement, rooftop or backyard, there’s nothing to worry about. Roku’s long-range wireless receiver provides up to four times the range and a stronger signal for superb streaming no matter how far you are from your router.

What’s in the Box
The Roku Streaming Stick+ comes with a voice remote with TV power, volume, and mute buttons, two AAA batteries, a USB power cable with long-range wireless receiver, a power adapter, and an extender cable.

Users can select from hundreds of free channels featuring movies, TV, sports, music, and more. They also have a one-click-access to free entertainment with Roku’s  Featured Free option.

Sports fans can also watch their favorite sports events on more than 140 sports channels. Roku claims that it offers more sports channels than any other streaming player in the market today.

For a complete list of channel offerings, check out Roku’s official site.

The current generation of Roku Streaming Players consists of the following models:

This is the most affordable streaming player in the range, which currently retails at $29.99. It’s recommended for first-time cord-cutters and those with spare TVs that need a separate streaming device.

The Roku Express is easy to set up. Just plug it in, connect to your wireless network, and start your smooth HD streaming.

Use the simple remote with channel shortcut buttons to navigate directly to your favorite sports channels or news programs.

Included in the box are:

One of the best features of the Roku Premiere is its capability to feature 4K movies with the 4K Spotlight channel.

This means that users experience picture quality with great detail and vivid clarity and color on all their favorite in-season shows, live news, top blockbuster movies, and favorite TV shows.

Included in the box are:

The Roku Streaming Stick+ is popular among cord-cutters because of its smoother streaming with a long-range wireless receiver.

This is perfect for watching TV shows while you’re in the basement or outside the backyard for a weekend movie night with family and friends. It’s compatible with HD TVs, 4K UHD TVs, and 4K UHD HDR TVs.

The remote control features voice command feature with TV power, volume, and mute buttons. It also works with Google Assistant and Alexa. It retails for $49.99.
Included in the box are:

Also available is Roku Ultra’s premium JBL headphones that are best-in-class and perfect for private listening.

Included in the Roku Ultra box are:

The Roku Ultra retails for $99.99, respectively.

Roku also offers other streaming products and accessories such as: 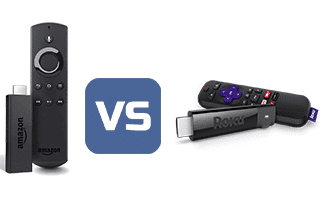 How does the Roku compare with the Amazon Firestick?

Both devices may seem to have equal performance but there are some features that Amazon Firestick fares better than Roku.

For instance, Firestick allows you to store data with its 8 GB capacity. Cloud storage also comes free for all content purchased from Amazon.

The Roku stick, however, has limited storage at only 256 MB and only 512 MB memory although this can be increased with a micro SD card.

The Amazon Firestick allows parental controls to be activated to prevent unwanted content or those that are inappropriate for children to be accessed whereas the Roku stick doesn’t have parental controls.

However, users can create a 4-digit PIN but only to add new channels and not prohibit content.

Finally, because you can’t Jailbreak a Roku Device, the Firestick is a much better streaming option overall.

The Amazon Firestick offers sideloading capabilities so you simply have more freedom and capabilities with the Firestick by being able to access 3rd party apps with ease.

Roku vs. Amazon Firestick: Your Guide to the Best Streaming Device

Using a VPN With Your Roku Device

Unfortunately, you are not able to install a VPN application on a Roku device.

However, you can install a VPN on your router to ensure network privacy across all internet-connected devices.

Check out our Roku VPN guide below for more information.

How to Install VPN on Roku

For more tech and streaming tutorials be sure to sign up for the TROYPOINT Advisor with updates weekly. This Advisor provides all the best cord-cutting tips to get the most out of your favorite streaming devices and more.

What is Roku and how does it work?

Roku is a brand of streaming devices that lets users stream Live TV, Movies, TV Shows, and more through internet-based applications. Roku works by connecting to the Internet via a wired or wireless connection to stream media.

Can I Jailbreak a Roku?

Unfortunately, Roku devices cannot be jailbroken to allow for side-loading of 3rd party apps. To do so, you will need an Amazon Firestick or Android TV device.

Which is better Roku or Firestick?

Roku devices are great for those new to cord-cutting and who use paid streaming services. However, we recommend the Amazon Firestick due to its ability to side-load 3rd party applications for free Movies, TV Shows, Live TV, and more.

What Channels can I get on Roku?

Roku offers tons of premium channels for installation including Disney Plus, Hulu, ESPN, and many more.

Are there Monthly Fees for Roku?

Roku has no monthly fees for use, however, some apps require subscription and payment such as Netflix, Hulu, and more.