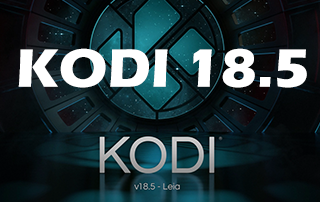 Kodi 18.5 has officially been released and is now considered the “stable” version of this software.

The following article shows the updates and changes within Kodi 18.5 Leia. You can also download the most recent version using the links below the text or learn how to update.

Important – Please note that TROYPOINT has not tested Kodi 18.5 with any add-ons or builds and some may not work properly with this new release.

There are no new features in the Kodi 18.5 release, only bug fixes.

Should you update?  Most people won’t notice any improvement as these are small fixes.  If you see something that has been causing problems for you in the list below, yes you should update.

Below you will find the Kodi 18.5 changelog pulled directly from the official Kodi Website.

Update to Kodi 18.5 on Firestick

Use the following commands in your Linux/Ubuntu terminal to install Kodi 18.5. Follow the prompts as you would with any other software installation.