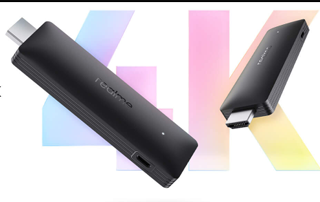 An all-new Google TV Stick from realme has been released and is now available on the official realme website.

This device is the first device since the Chromecast with Google TV to have built-in Google TV technology that is replacing Android TV software.

We have seen various Android devices such as the NVIDIA SHIELD receive updates to include the new Google TV interface, however, it has been met with some backlash:

NVIDIA SHIELD Users are Not Impressed with Google TV Interface

With realme being the first device since the Chromecast with Google TV to have the software built into the device, many are hoping for various improvements.

You can purchase the realme 4k Google TV Stick at their official website below:

This 4K device also features support for HDR10+ and HDMI 2.1 for a fabulous streaming experience.

Unlike other Android TV and Google TV devices, the realme 4k stick does not connect via dongle.

Instead, this streaming device comes in the form of a Stick that is popular among Fire TV users with the Amazon Firestick.

How to Jailbreak a Firestick or Fire TV

Similar to the Alexa Voice Remote, there are dedicated App buttons for popular Streaming Apps.

We can also expect sideloading capabilities that will allow you to install Streaming Apps and more not available in the Google Play Store.

We suggest checking this page often as the device is released for more information on pricing, specs, and more.